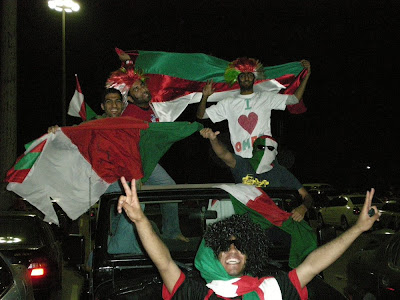 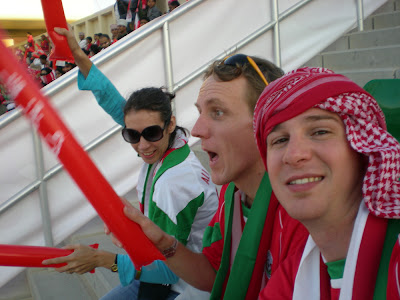 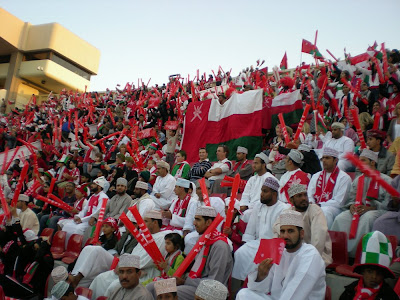 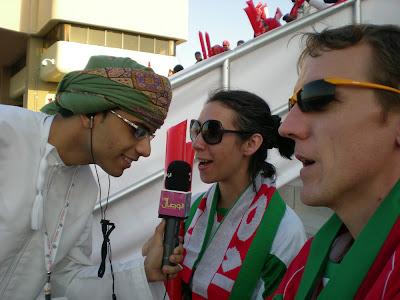 Now the Oman team has one very popular player, their goalie Habsi, who plays for the Premiere league, but the Omani team was considered the clear underdog for this game. It could be said that the Iraq team had a very off day and the Omani team played well (which is true), but it almost seemed as if the crowd won the game. They never stopped cheering, and whenever Iraq would get the ball, the entire crowd would boo or whistle. I can see how Iraq managed to not score and let in 4 goals. Yes, the score was Oman 4 Iraq 0. Although I thought the booing was a bit much, the crowd’s performance was something to behold and I don’t think I will ever see anything to compare. The best part was when we were leaving our seats. At the mouth of our entrance there was a celebration party. Drums, dancing and a celebration song. Daniel got it on video, we will post the link soon. I would also like to add a note that the Iraqi fans did their duty as well. Flags and organized cheering with a large bass drum. But they were one section out of too many. Anyways, who knows how Oman will fair with some of the stronger teams later in the Cup, but they had their moment, and it was lived to its fullest.
Posted by Daniel Lynds at 3:38 AM