we went to the souk in muscat again and enjoyed ourselves more because things were actually open. last time we went was during eid (a religious holiday) and only a few shops were open. it was okay, but not the best.

here is the stained glass work from the central room. its cool, yeah? 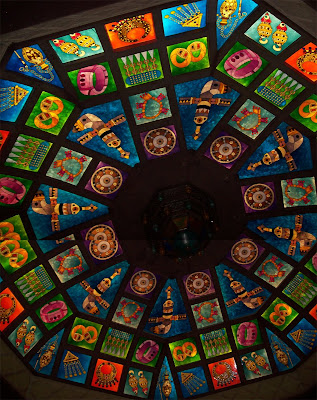 oman men's caps at the souk. this is only one of many shops. some shops are literally stacked full with them. 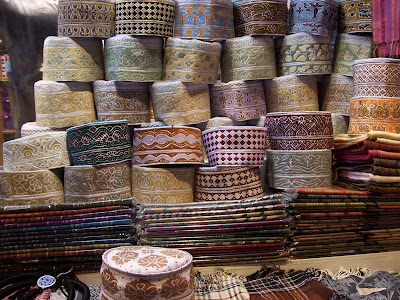 stefania's judging face. she says she has no haggling skills, but the day we were there she sure busted them out. basically she paid only what she wanted for everything or she walked out. one she negotiated started at 25 rial and she got them down to 10! thanks to her we felt brave too and cut down the price we paid for a throw for our coffee table. 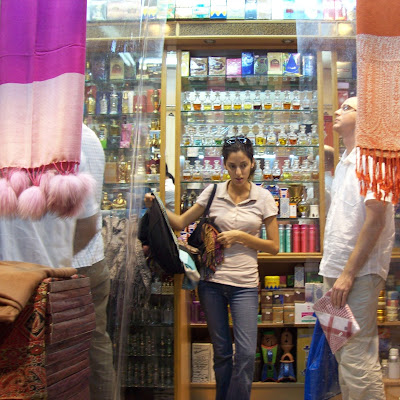 sadly, stefania is leaving this week to head back to toronto for a journalist gig. we will miss her.
alright. thats all for now. i may post over the next few days, and if something CRAZY happens ill post with the week. if not, i will definitely post about the u.s. election next week.
speaking of posting, i know im bad at returning comments on here, but i hope that hasnt discouraged others from doing so. its nice to know who is checking this blog out, so please do comment at will.
d
Posted by Daniel Lynds at 4:31 AM 1 comment:

i thought i would post early for this week because i teach many hours on saturday.
we have been hanging out with gus and stefania (a couple from the greater Toronto area) and have visited several places with them. here is a place very close to Nizwa (where we live) called Tanuf. there's a huge damn there, but the day we were there there was no water so it wasn't that exciting. here's a pic of sundi in her favorite hat, shirt and glasses. 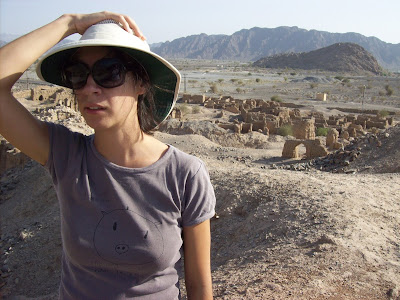 we went to the nicest hotel in muscat for a breakfast buffet on gus' birthday. it was great. one of the best breakfasts thus far in my life, with not much scandal-to-do. here's a pic of sun and i on the beachfront property. far behind you can maybe see the weird chemical plant.

me on the same beach. if i ever record a solo album this would be one of the front runners for the cover. 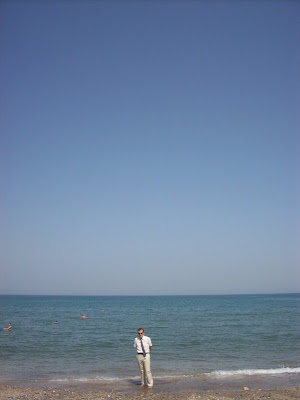 so. not much time to post or edit pictures, but we have a lot of cool ones from this past week.

d
Posted by Daniel Lynds at 1:52 AM No comments:

more goats and little to do

so the past week or so has not been very eventful. we're still waiting for our schedules and the like whilst watching smoke pass out of our mouths from the shisha houses we frequent.

the gym has been nice. i will post pictures of us working out when i can. that'll be a gas.

weather here is really starting to cool off. sundi sported goose bumps last night in Muscat. wow. well she does get cold pretty easy, but it was an event.

next week i will write and post about our favorite restaurant here. we call it the turkian restaurant because originally thats what the sign said, but its obviously turkish. they have the best bread ever there. weve been twoce this past week and it was excellent both times. during Ramadhan it was sad because they closed for renovations and the like, so we were shut out, despite checking almost every day to see if it was open again. yes, that is how we roll in nizwa.

pix this week:
1) livestock here is often transferred via pickup trucks. cows, goats, even camels. here's a little pic of some goats. sadly, we always see the camels when our camera is at home. moral? dont leave home without the camera... 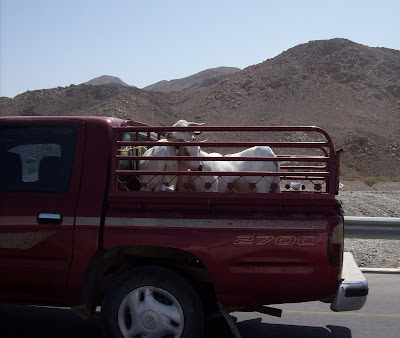 2) the effects of intense sunlight on produce.

oh...so well see you next saturday-ish. the publishing on saturday promise went to the wayside, but whatever...give or take a day, alright?

I said a while ago that I would post a picture of the rental, so here it is. This was taken on an outlook just outside Misfah.

Posted by Daniel Lynds at 9:40 PM No comments:

Some more pictures from Misfah:

While we walked around we saw lots of kids talking to each other whilst hanging out by their windows. No worries, they’re safe. 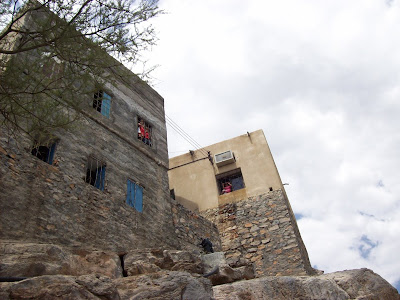 Dan by the Falaj (Canal) 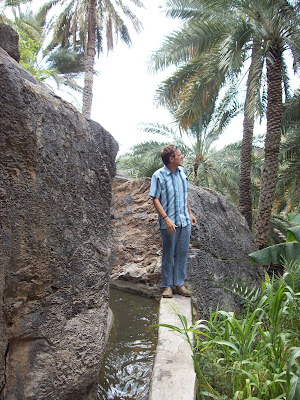 Sun by the Falaj 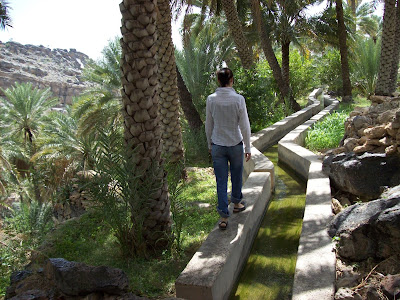 Posted by Daniel Lynds at 9:32 PM No comments:

this past week we mostly chilled out and prepped for going back to work tomorrow. The week has been spent mostly reading and writing and the like. Little else has gone on. I caught most of goodfellas the other night on tv and was happy with that.

Traveling around with our little mp3 player, we have tried to listen to all “new” music and have taken a firm liking to beck’s latest “modern guilt,” despite weird hints of religious “undertunes.” Albert Hammond jr.’s first album has also been getting regular play, and sundi has taken a particular hating to several decemberists songs from “the crane wife.” I am in partial agreement on the hate, but a few of the songs are pure…

Sun finished off “Waiting” by ha jin this week and is pretty far into “the comedians” by graham greene. I am focusing still on “the curtain” by kundera and “six walks in the fictional woods” by umberto eco. Also, I randomly open Anna Karenina for some more of that. Something we didn’t mention in last weeks’ post was that when the albers-fulton clan visited last week they brought with them a great many books which I dropped at their abu dhabi residence on my visit in march. So now, we are not in want of reading material.

Ok. So on to the pictures of the week.

I
This is from the museum at Al Hoota cave, which isn’t far from here and looks pretty interesting. We booked an appointment to go on Wednesday morning and showed up on time, but were turned away at the door because the precipitation was too high. According to one of the workers at the cave, “You will die if you go inside. You can not breath in there. The percipitaiton is at 100%” So. My question is: isn’t 100% a flooded cave? If anyone out there can answer this id appreciate it. This picture shows some of the goods you can get in the museum. Sundi thought it too strange to not take a picture. 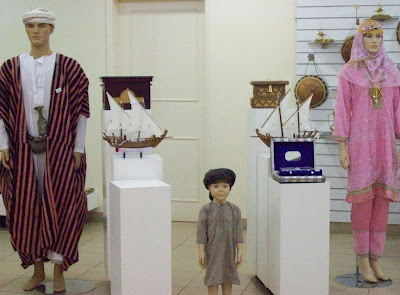 II
After being rejected from the cave we went to a nearby town called Misfah which is built into the side of a mountain. You can see hear a house literally built on top of natural rock formations. 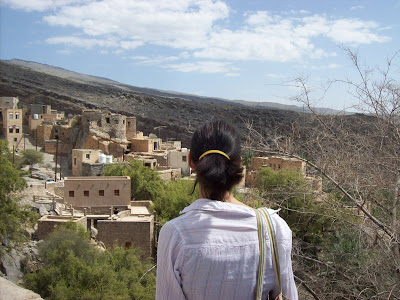 III
Yet another angle inside the village. This one with a bridge between two houses. 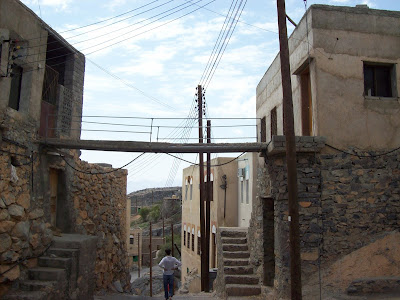 Posted by Daniel Lynds at 4:19 AM No comments:

clouds in the hood

so...
oman is beautiful. its hard to get a true feel for any place through pictures, but i thought id share a couple landscape shots to give some idea of what its like here.
I
this is from our kitchen window... maybe its hard to tell here, but the layers of mountains are fabulous...this area is called "falaj daris" meaning water canal ... something ... not sure right now what daris is ... will report later ... being in the foothills there is as close as ive come to a moonwalk ... well except mj's version ... 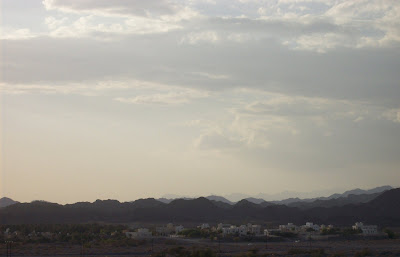 II
this was taken the other evening on the way back from muscat. for those of you who have made the journey you realize that the drive is just breathtaking. its really something and every small turn warrants a new gaze.
very nice 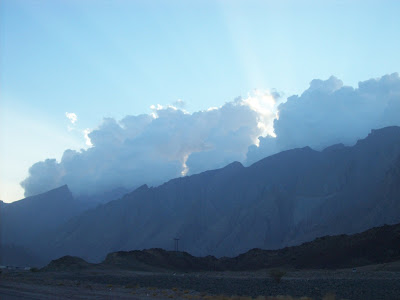 Posted by Daniel Lynds at 12:57 AM No comments:

dobry den:
Our school is located just outside a place called Birkat Al Mouz. In Arabic this roughly means: “pool of bananas.” The place was and is a banana plantation and settlements date back a long while. It’s a very charming little village and is shaded very nicely from banana and date trees making walks around and glances about pleasurable to all involved. We all went there twice during the visit, enjoyed the ruins, the falaj (water canal), and the local inhabitants who are extremely friendly and courteous.
Once again: some pictures.

1.
first time we went josh and sam got involved in the falaj dipping and diving. It was great fun as you can see here some local boys chilling in the cool clean water flow. 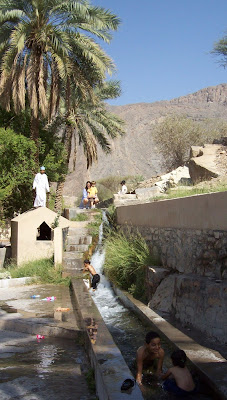 2.
the older settlement area is still inhabited in a few locations, but is mostly abandoned. Here are several frames as the clan ascends into the ruins for a peek around.

3.
we hit the city during Eid and everyone was back from the city sporting their Ramadhan acquired duds and hanging with their families. Here, a few boys are more than happy to have their picture taken as long as they get to look and laugh at it afterwards. 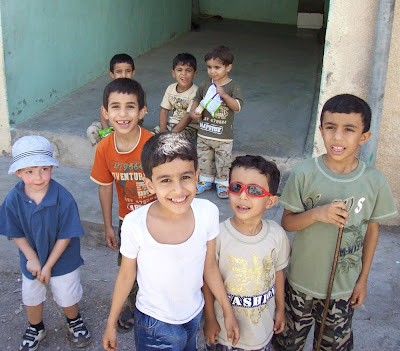 Okay. So. that’s all for now. Sun and I have the following week off and are ready to start extensively using our gym memberships at the Golden Tulip hotel.

It has been a long and busy week. The Albers – Fulton clan descended on Nizwa for a four day trip and we went to several places we had never been and got lost a lot (mostly thanks to me), but in the end we saw a lot of cool stuff and had a cool time.

here are some images:
1.
this is in a valley at the top of mount akhdar. I do not know much about the mount yet, but will be updating you as it is very close to our school and therefore we will definitely be returning. To go up the mountain you MUST have a 4wd. There is a police checkpoint to make sure you do have one. If you do not you can park and climb, but I would guess it would take weeks to ascend. The scope and size of the place are impossible, but to give you a feel, this image shows how some crops and the like are grown in the valleys in one small region of the mountain. 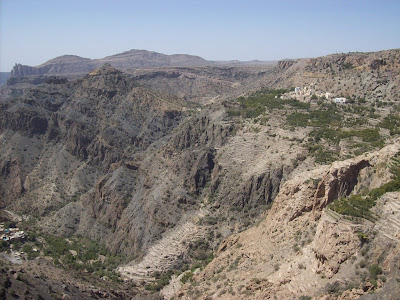 2.
here, sun and the clan prepare to head off to the ruins in the background. Again, we have no idea how old or the history of this area as we just happened by it. there are thousands of such settlements all over Oman. 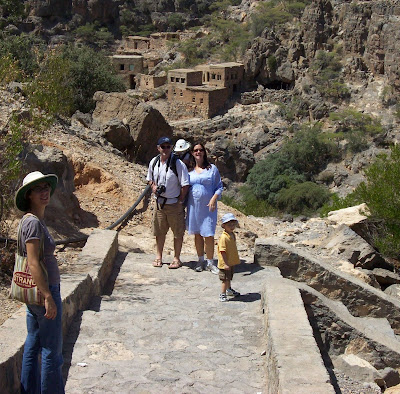 3.
taken looking out from the ruins in picture one, here you can see another set of ruins off in the distance. 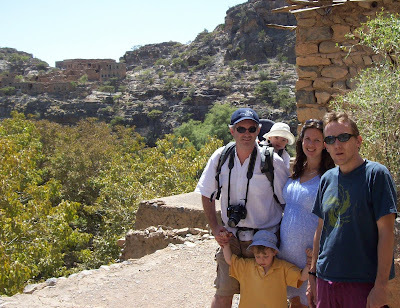 One of the coolest things that happened here was we bought pomegranates. Jabel (mountain) Al Akhdar is famous for its pomegranates, which ripen in September to early October. Yes we caught them perfectly in season. We were driving around looking fro some and were about to leave when we saw a bunch of Omani ladies carrying bags filled with them. We went to them and asked where we could get some, and then noticed that their bags were not filled with pomegranates at all but with sweets and drinks. Anyways, we were right in front of this woman’s house and we used the only Arabic we know (Hello…5? Pomegranate?) and she came back and gave us 10 pomegranates for 5 rial. Sweet. The coolest part of this is that in Arabic pomegranate is “Roman” which Sundi learned from Shamsa, a woman works in the office at school. Good work Sun!!!
Posted by Daniel Lynds at 8:19 AM 2 comments: